There was Thing 1 and Thing 2 and you might have thought that was enough.  You would be wrong.

The thing about The Thing is the story is very basic.  Some Thing is found.  It’s not from here.  Cue ominous music.

This didn’t keep the first two films from being quite different experiences.  But a potential viewer would wonder what else the third installment might bring to the table.

A female hero, for one thing.

The film started exactly as the 1951 film did with the discovery and removal of an alien body from under the arctic ice.  The scene is a clear message that this new film would not ignore its origins.

In this film, I found the in-your-face homages worked just swell.  It was part of the entertainment.

There are some telegraphed moments.  When you realize so-and-so isn’t human.  Well, you saw the hints about his thingamabobs and when he didn’t whatchamahoozit.  I mean, the lingering shots of randomness are kind of hard to ignore.

So, there are some unsurprising surprises.  This isn’t a huge drawback in a third version of a film story I have seen many times before.  It’s still insulting as a viewer, but I’m in for the Hollywood schmutz already.  So I just kept my eyes open and ignored the slight sting.

This Third Thing blends the best elements of the two films without managing to better either one.  We see the elements of the Mad Scientist type character brought from the ’51 film, plus the more gritty horror-realism of the ’82 film.  We get all that with the backdrop of the Selfish Man as viewed through a 2011 lens.

All in all, this is obviously not an original film, but it has some original moments.  It’ll probably stand as the third best of the films by my count.  Far worse things have been said about a film.

As in many things, what counts for this film is execution.  The how.

How is this disastrous alien encounter going to go down?

It went down in flames.  Screaming.  Just like it should.

What counts is Lars. 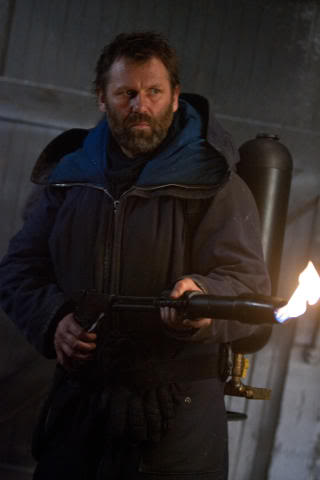