It seems like every other day, one of my favorite trees gets hacked down.  I’m told by the gub’ment that it’s because of the dreaded Emerald Ash Borer beetle, but I think it’s probably the anti-squirrel lobbyists at work.

Pour a little out for my fallen neighborhood sentinels (Spirit provided for scale). 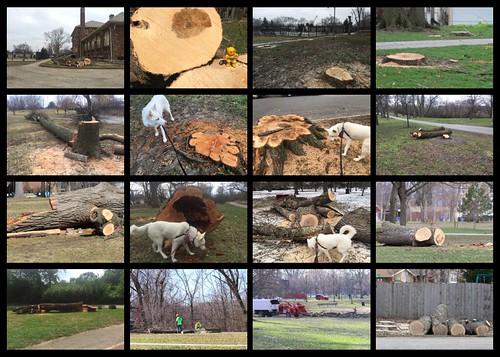 You might think it’s weird to have favorite trees, but it’s not.  I’ll fight you over it.  When I was a kid, I was rooting for the apple trees in the Oz movie of 1939.  The Ents always seemed like they had their shit together, even if they were a bit isolationist (that’s hip among the idiocracy these days if you didn’t know).

The majesty of these big ass trees will not be replaced in my lifetime.  The giant willow trees, oaks, and elms leave a massive hole in my soul.

Naturally, I fill this hole with thoughts of revenge.

Not all trees are harmless.  Take for example the grabby tree outside the Freeling’s home in Poltergeist.  Then again, maybe it really was a wise, old tree.  Robbie was kind of a sniveler and they built that pool right in the middle of a skeleton sleepover.  Rude.

The rapist tree in Evil Dead is just a dick.  Obviously.  ‘Nuff said.

That kite-eating tree was yet another bully Charlie Brown had to deal with.  Sometimes life sucks, Chuck.  At least your psychiatric help is only five cents a pop. 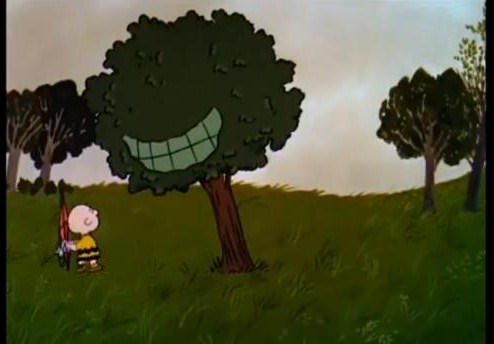 Old Man Willow is an angry sort, but it’s hard to blame him.  The Ents may have their shit together, but they’re not an inclusive bunch.  I don’t see any Ents coming to the Old Forest to take care of that old Huorn.  Besides, I’ve been told Hobbits are quite nutritious.  Maybe people should stop chopping things down and the old crotchety survivors wouldn’t have to put them to sleep in the strong embrace of their roots.

There aren’t that many evil tree movies (as compared to the 100 asslodes of shark movies).  It’s not easy to make a tree scary.  Poltergeist sort of succeeded, but we were naive and easily frightened in 1982.

There are unintentionally funny shit movies like The Crawlers and Dark Was the Night.  You get the sense they might have wanted to be scary, but they gave up – cued the chainsaw sounds, squeezed some ketchup out of a rubber tree trunk, had a woman scream, and called it a day.

There are weird movies like The Guardian.  I remember liking The Guardian but I don’t remember anything about it.  I have a feeling it wouldn’t hold up.  However, I’m a fan of feeding children to trees.  Or maybe I just have a soft spot for evil nannies and magical nymphs and am willing to look the other way.  Either way, this isn’t about an evil tree.  Not really.

Treevenge straddles the comedy/horror line just like all Christmas movies do.  Family dinner and psycho, man-eating Christmas trees are both bloody and tragic to the point where you have to laugh or lose your mind.  Treevenge is funny and it’s short.  Two solid positives.

Lumber vs Jack is just, yeah….”Just when you thought it was safe to have wood.”  That isn’t worth much more discussion, but I had a hard time not laughing with it, despite the very low budget.  I wouldn’t recommend it to anyone, those of you who would watch such a thing already know who you are.

Non-tree-specific eco-horror is mostly a failure (The Happening, Seeds of Destruction).  With a few exceptions, like Long Weekend and its acceptable remake.  Bad relationships are a fact of life and we all know Australia is out to kill us anyway, so Long Weekend seems more like a documentary than a horror film.  The Ruins is decent enough.  The proverbial “they” tell me the novel is better.  Regardless, there are no murderous trees.  This is a trend I don’t appreciate.

Swamp Thing and Man-Things don’t fit the bill either.  Those aren’t trees.  They might be tree-adjacent, but that’s stretching the concept beyond its limit.

I tried to watch The Crawlers.  I couldn’t find a version to stream.  I even searched under all its names – The Crawlers, Creepers, Contamination .7, and of course, Troll III: Contamination Point 7.  A 1989 toxic waste movie would have really done it for me.  Some things are just not meant to be, I guess.  Just like the EPA’s attempt to eradicate the town of carnivorous tree roots.

I watched Acacia: Root of Evil and Devil’s Tree: Rooted Evil.  Roots get so much shit, but they do a lot of the hard work.  Why do we hate them so?  Ask me in the spring when I’m having my pipes rodded.

Devil’s Tree was not bad for a low-budget film.  The story is basic but generally stays on track.  The main actress kept the thing moving.  I was intrigued because I have been to the park in question in Port St. Lucie, Florida.  Nothing particularly bad happened to me there, but I was subsequently late to a St. Lucie Mets game so that’s something.  This is a “based on true events” movie.  It gets the legend correct, but the “based on” part gets pretty thin by the end.  Spoiler – the ghost did it.  No surprise.

Acacia is an interesting film if for no other reason than the family’s home is pretty slick looking.  Scandinavian modernist design with a Korean flair.  The wife does woven tapestry art and her loom is cool as hell.  It’s a movie with a particular style and sound.  Feels like you’re watching a 1970s made-for-television soap opera horror film.  It feels like Burnt Offerings got shoved into a small Korean house.  I can’t dislike the mood it creates even if it seems dated.  Dated isn’t all bad.  Major Spoiler – the ghost did it, with help from the parents.  This might be a bit of a surprise, but you can figure it out if you’re paying attention.  It’s still a solid ending.

The bad – neither of those films involved evil trees.  There were trees, yes, but they were falsely accused.  Go figure.  Never trust the children.  Ever.  You’ve been warned.

What’s left for me is the glorious early days of horror.  The Day of the Triffids.  The Woman Eater.  The Navy vs the Night Monsters.  Maneater of Hydra.  From Hell it Came.

All variously close to what I was looking for.

The Navy vs the Night Monsters got the nod.  It was amazingly enjoyable for how ridiculous and bad it was.

I had a hard time even finding a streaming copy to watch.  After aborted viewings of a Spanish-language version and a copy with sound out of synch by nearly a minute, perseverance and dogged determination pulled me through.  I found what I needed.

The original material came from the novel The Moster From Earth’s End.  I know, the book is probably better.  I’ll let you know after I read the other 69,000 titles in my to-read list.

The $178,000 total budget and 10-day filming schedule were certainly impacted the final product, but looking back, the f/x are going to look schlocky to present day viewers no matter what and the acting is about what you would expect.

There is a noticeable objectification of women going on in this film.  A sign of the times.  It’s pretty blatant.  It’s so blatant as to be nearly hysterical.  There are some creepy scenes with the men talking about the available women on the island.  The funny aspects come about when, as in one exchange, our beautiful, blonde nurse (played by Mamie Van Doran in a sweater, who had been looking forward to being eaten by the monster, but sadly was not) tells the hero, “Chuck, I’m in love with you.”  His response?  “Give me some time, baby.”  Ash Williams would have been proud.

The Antarctic exploration of a hot lake under the ice brought back specimens.  The plane transporting that obviously dangerous stuff crashed at a Naval base on an isolated island.  They planted the strange plant specimens on the island.  As you do.  Naturally, having come from under the ice, these trees are nocturnal and were just waiting for the sun to go down.  Growing up without sunlight, they ate other stuff.  Those walking, carnivorous trees made tiny offspring and tried to take over the island.

Your basic Navy island weekend.  Naturally, the Admiral is peeved, sitting in his office far from this island.  But they have an answer!  Napalm.  Of course.

By this time, the tiny root-spiders have grown into cute two-foot tall walking stumps with wavy little twigs.  This will not save them from the napalm.  Navy firebird leader fired at will, strafing the beach full of cute little crawlers.  It was like watching the air show, but with more napalm.  That’s probably because they used colorized stock footage of the Blue Angels.

Send in the narrator…

“Gow Island, in the past, virtually unknown to the rest of the world.  Today a famous landmark in man’s struggle with the unknown. Another step forward in the march of science.”

Who doesn’t love a cargo of deviltry, devastation, and death?  Yes, that sailor’s arm got ripped off.

2 Responses to Tree slaughter, Tree revenge, and the Navy